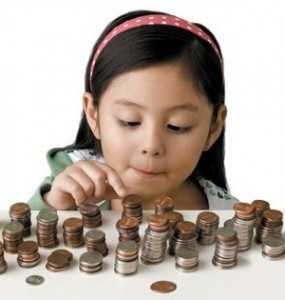 It happened again yesterday. Sitting rather idyllically in our yard, we heard the sing-song strains of an approaching ice cream truck.

There is nothing to produce a pied-piper like mass hysteria than this travelling purveyor of ice cream, as my kids start jumping around, collecting loose change with an urgency that is a little startling (when you consider it’s about ice cream).

And then they turn towards me (and my wallet). And, once again, I engage in a debate with my kids over shelling out money for this kind of expense- which always leads into another discussion, in which they want to use “their own money”.

There is always a great debate over whether or not to give your children an allowance. Some are opposed, with the premise that children should be doing chores around the house, simply for the sake of contributing to the household and sharing the work.

Truthfully though, there is a valuable lesson to be learned- about the value of money and responsibility. And there is no time like the present to get going on those life lessons, especially when it comes to money management.

You aren’t going to give your five-year-old the same amount of money you would to a thirteen-year-old. This is partly because the work is likely different, and because the lessons that you are teaching both groups will be different as well.

Have your child split their earnings (however small) into three categories (jars are good, because of the visual emphasis). Part of their earnings goes towards savings, part towards spending and part towards charity. Let them get involved by choosing a charity that matters to them, and in identifying savings goals.

In my house, sadly, this seems to be for the ice cream truck at the moment.

Pick chores that can be accomplished by your child that are both reasonable and age-appropriate. Be consistent, and have them do the same chores, preferably around the same time of day/week, so that it becomes part of the routine.

In doing so, you will eliminate some of the potential for arguments.