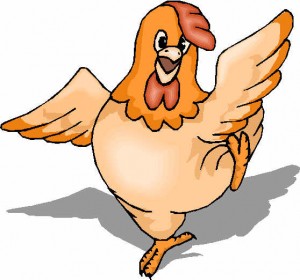 Buying a whole chicken is an inexpensive way to get your poultry. They are frequently on sale, and a small fryer chicken is often enough to feed a family of four.

Before preparing, be sure to rinse under cold water, inside and out- and remove giblets from the cavity if it’s not already been done for you.

With a quality knife and a few extra minutes, you too can cut a whole chicken into individual portions for less than you would pay otherwise.

One delicious (and super easy) way to cook a whole chicken is to throw it in the Slow Cooker and let it cook and baste. Ball up pieces of tinfoil (enough to give a platform for the chicken to sit on, allowing juice to run down). Season chicken with whatever you like, throw the lid on and cook away (a word of caution, chicken cooks more quickly than some other meat in slow cooker- more than about four hours will over cook it).

A whole chicken is the ultimate one-pot supper too. Place a chicken on top of an assortment of veggies and potatoes, and they can all roast together.

Does your idea of a whole chicken involve a fragrant slow roast in the oven, a la Sunday dinner?  Pat butter or brush skin with olive oil, season and put in the oven at about 350.

Truthfully, small fryer chickens cook relatively quickly and can make for a fairly low-maintenance dinner- the kind that comes in handy if you have other things to attend to while supper is cooking.

Like the idea of a roast, but yearn for a different flavour?  You can give a roast chicken a host of different flavours by making a paste out of butter and fresh herbs (tarragon and minced garlic are very good together). Slice the skin on both sides near the top of the breast bone. Pull the skin back slightly, and work paste in between the skin and the meat with your fingers. This infuses the chicken with loads of flavour.

You may have heard of the rather strange (but very tasty) method of cooking a whole chicken atop a beer can.

Essentially, you season your bird and place it so that the cavity is “sitting” on top of a can of beer (the can should be about half full- more and it will overflow). This is most often done on a BBQ, heated to medium-high heat.  Although it looks kind of funny, this cooking method achieves very moist, yummy meat.

If you don’t have a BBQ, or prefer to cook indoors, this can be done in the oven as well.