Frugality is About Attitude 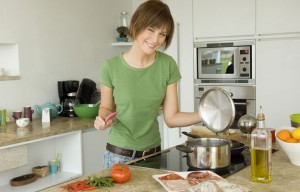 She’s been gone for many, many years, but I’ve recently been thinking about how my maternal grandmother was awesome. Not just because she was hilarious and cool (and she thought I could do no wrong as a child ever- which is a tremendously powerful ally to have as a kid) but because she had this great attitude towards household and spending, as many who weathered  World Wars and the Great Depression  did. It makes me think about the evolution of things, and how maybe if we shifted our attitudes toward spending and “having”, debt would be far easier managed.

The lesson here- is that your happiness around money has very little to do with amount and everything to do with attitude.

Our generation has benefitted from technological advances, which grants us, among other things, immediate access to information.

While this is positive, and facilitates our living, we have also become conditioned to an expectation of immediacy. There was no buy-now-pay later when my grandmother was growing up and raising her own family.

There was buy what you can and be creative with what you have.

The Kitchen is DIY

Back in those days, they cooked. I mean really cooked. With actual ingredients, that at times could be complicated, with several steps (i.e. making your own pastry and breads), but produced healthy, wholesome meals that serviced their budget as well.

They did simple meals, like dipping chicken pieces or frozen fish (which can be quite inexpensive) in egg or milk and cracker crumbs and then pan-frying in a little butter. Easy, cheap and yummy.

Yes, they had the benefit of time that many of us who work and manage a family do not. But they also had budgetary constraints to work within, so they figured it out.

Long before the push to save Mother Earth, the attitude of extricating every inch of usability out of an item was very much in vogue during that era.

That was not so great if you were the youngest in a line of siblings, but it served a purpose.

They used to darn socks even. Now, that might be a bit extreme, but it proves a point.

You Make Your Own Fun

Stickball, hide and seek and imaginary play were the order of the day for kids.

Fun is not bought, but is manufactured (and that goes for the grownups too).