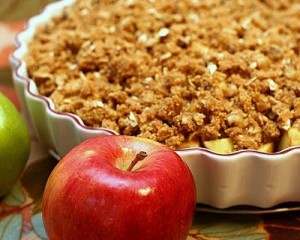 Been apple picking lately? Maybe you were lured in by the displays at your grocery store, with stacks of shiny apples. Regardless, these plump, juicy babies are in season- which means they are most plentiful, cheap and tasty right now.

If you find yourself with a surplus, or if you are just trying to decide what to do with the seasonal gems, here are some ideas.

Toast your morning bagel as usual, but change up the toppings. Thinly slice apples. Smear bagel with cream cheese and layer with apples. Top with a sprinkle of cinnamon.

For an extra protein punch, or to make this a meal salad, add chopped cubes of brie or chicken.

I love this one because my family thinks I’m some kind of baking genius, but this actually couldn’t be easier (shhh, don’t tell!).

In a bowl, mix together about a half cup of brown sugar, 2 cups of rolled oats and about a tbsp. of cinnamon (if you like yours sweeter, you can add some more brown sugar).

In a shallow baking dish (small square works best), layer thinly sliced apples with mixture (probably in thirds). Reserve enough to cover the top. Dot the top with butter dollops and bake for about 20-30 minutes- or until smells delicious!

Using a mandolin, or a really sharp knife and some patience, chop or shred apples. Mix in with a bag of prepared cabbage coleslaw mix, and combine with 1tsbp of honey and about ½ to ¾ of a cup of mayo, depending on how much you are making.

Mix together, and add dried cranberries and almonds for extra flavour and colour.