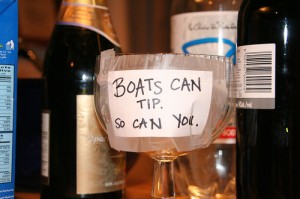 You’ve made changes and committed to a frugal lifestyle. After going through your spending with a fine-toothed comb, you sliced and diced, sacrificing extras in the sake of keeping your budget intact.

So how do you justify spending when it comes to tipping?

Most of us, at one point or another in our lives have worked in industries where tips are the lifeblood of your income. So many of us understand the value both of a tip- and of the good service associated with it.

Did you know that servers are actually paid less than minimum wage? Employers are allowed to pay servers “serving wages”, which vary from province to province, with the expectation that their good work will be rewarded by patrons.

There is the argument that employers should be responsible for paying their employees and not the patrons. True or not, that’s not the way it is and is not likely to change in the near future.

Service industry employees are counting on you to supplement their income. Fact.

That’s not to say that you should open your wallet to every service industry individual. Reward good service with a standard tip (generally 15 percent). Reward great service at your discretion beyond that.

If you’ve received sub-par service, there is no need to tip. The key is to remember the function of tipping, and the relationship between service and compensation.

Truthfully, if you can’t afford to eat out and tip, you should be staying in that evening. Consider the tip as part of the meal cost.

Again, if the service is sub-par, there is no reason that you can’t come home with some extra cash in pocket- but plan to spend it in your budgeting.

It’s helpful to be able to do the math too. Make sure you are calculating the tip on the pre-tax amount.  If you are paying electronically, many establishments offer a percentage amount option on their electronic devices, which takes the guess work out.

In my many years as a server, my experience is that most people wanted to leave an appropriate tip, but that math was not their strong suit (guilty as charged here as well).

Make sure that all charges are correct before you calculate as well. Furthermore, be aware that many establishments include a gratuity with the bill (particularly if you are with a large group. The definition of “large” varies from restaurant to restaurant, so check that too).

Many people end up tipping twice, and only realize so once they get home. Personally, I think it is a bit shifty when servers don’t make the patrons aware that tips are included (when they are included).

Best plan? Ask and clarify before you pay.

There are other industries in which employees seek tips as well. Hair stylists, spa services, delivery people, movers and many more look for tips for a job well done.

Rule of thumb, as a consumer, you should reward service- and you should budget to include these payments as though they are part of the actual cost.