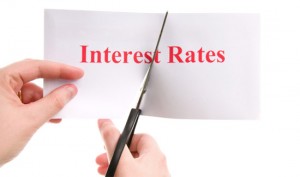 Ironically, I’ve just written about interest rates, and why you should pay attention to headlines. This past week, the Bank of Canada provided a bit of a shocker by reducing interest rates– marking the first movement since 2010.

This is a big deal. Here is why:

Why the rate cut?

If you have a car, you’ve been high fiving yourself and anyone else in the parking lot every time you go fill up. Oil prices have been in a downward slide for weeks now. While this is awesome for car owners in the short term, oil is such a major part of our economy that this is a sign that trouble could be brewing.

A sign that was given a little more credence by the Bank of Canada, totally shocking everyone by cutting rates. They’re worried that the Canadian economy might be in for a bumpy ride as the trickle effect (pardon the pun) of these cascading oil prices filters through the economy. The rate cut is meant to get you spending and keep the economy rolling.

The next rate announcement is in March, and several analysts are suspecting that rates may return to their former position at this time.

Don’t make this rate cut the basis for your current borrowing environment.

What should I do?

This is good news in the short term with those who have variable rate debts (i.e. mortgages and lines of credit) that revolve based on the overnight lending rate (which has been cut a quarter of a percent to 0.75 percent). You’ll have a little more cash flow in the short term.  Be smart with this money and use this opportunity to use that cash wisely- either to make a lump sum payment on your mortgage, RRSP contribution, pay credit cards, etc. etc. That’s your best bet to coming out ahead- especially if we might be in for an economically bumpy ride ahead (The BOC cut their growth forecast for 2015, FYI).

If you are a variable rate holder, you may want to consider locking in for the longer term at a lower rate.

What shouldn’t I do?

We are at the gates of house hunting season, which means that many of you may be in the market to buy a house. What this rate cut can mean, especially for those in markets with huge prices, low available stock and lots of bidding wars, is that there is a temptation to take on more mortgage to secure a property.

Your mortgage will far outlast the length of this particular rate cut, and it is not a good idea to take on extra debt simply as a product of it. The consequences can be dire, especially if you are stretched thin, and the BOC is right about their economic predictions.